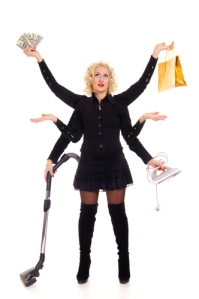 Back in the late 90’s and throughout the first decade in the new millennium, the workplace changed dramatically. The shop floor and offices were being automated with desktops and software at an alarming rate. With the newfound productivity a new buzzword was coined that still floats around today. Multi-tasking was used to describe performing several tasks at once. This was possible because simultaneous tasks could be performed by computers that were once done by individuals. At the time we did not think about how this increase in productivity would impact our work-life balance or the quality of work we were producing. Many early adopters were plagued with GIGO errors (garbage in, garbage out) as reports seemed inconsistent or unrealistic. The very promise of the computer was a paperless office with no errors as the “human factor” was minimized. Well, I don’t know about you but I produce more paper today than I ever did when I first started working. That’s because  today we are expected to handle increasingly larger workloads and more tasks in our modern and efficient workplaces. If you sit back and think of the definition of productivity as measuring the increase in production/service capacity of a business we are far more productive than our grandparents. But when you peel back the layers of the productivity onion to include re-work, quality concerns, recalls, order checkers, and forensic audits, have we really come any further?  Productivity and efficiency are two different beasts. One measures singular output, while the other measures lack of errors.

Yes we can all do many different tasks, but the key to efficiency is choosing when and how to perform them. Take the example of sitting in line at Tim Horton’s . I guarantee you that when Tim’s was serving just coffee and donuts you were served quicker and the donuts were fresher because they were baked by the local store and not shipped in like they are now for re-baking. Tim’s like many other quick serve restaurants has lost focus in trying to be everything to everybody. This has added multiple items to the menu. How good can you do your job if you need to know how to make 50 different menu items instead of focusing your attention on your primary products?

The law has started to catch on to the dangers of multi-tasking by banning cell phone use and other non-essential tasks while driving. The decision was obviously needed to ensure public safety, but did not come right away, nor is it still banned in every state or country under the “multi-tasking” mentality.  So I’ll leave you with this thought. How good is your work when you are handling multiple projects at the same time. Is your attention focused equally on each task or do your lower your standards on some work to get more work done?  Would  you want your surgeon playing chess and operating at the same time? (FedEx Commercial). Just how productive are you?